Prime Minister Narendra Modi on Thursday laid the foundation stone of the new Parliament building in New Delhi at an event that was attended by leaders from various political parties, cabinet ministers and ambassadors of different countries.

Mr. Modi also performed the ground-breaking ceremony for the building, which is expected to be completed by 2022.

Pujaris from the Sringeri Math Karnataka did the rituals for the ‘bhoomi pujan’ at the new Parliament building site.

The new building will have an area of 64,500 square metres.

Updates from the event

Mr. Modi said “We begin the construction of a parliament building complete with our own Indian symbols and values. What can be better than when we celebrate the 75th year of our independence we do so in the new Parliament.”

The Prime Minister further said “The new building is the amalgamation of the new and ancient. It is a symbol of bringing in changes in oneself looking at the need of the hour. I can’t forget the first time I entered the parliament as PM, I bowed my head.”

Mr. Modi said “Our constitution was given to us in Parliament. All our aspirations, successes are encapsulated in the Parliament building. These are all also the legacy of our democracy. And while harking to our glorious association with this building it is important to be realistic as well. The Parliament building was modified from time to time over the last 100 years, and these modifications have led to a point when this building also needs rest.”

“It will be the construction of an independent India. The source of energy of any parliament is democracy. There was a time when many doubts were expressed on India’s ability to remain democratic. We are proud to say that we proved naysayers wrong and are forging ahead on the world stage.

“Every generation of Indian needs to know why democracy remains strong in India. While people talk of the Magna Carta, even before that in the 12th Century Bhagwan Basaveshwara had set up the Anubhava Mantapam”.

Mr. Modi said “Basaveshwara had said that the Anubhava Mantapam was set up to get people and rulers to unite in working for prosperity of the land. Even before Anubhava Mantapam, in Tamil Nadu near Chennai is a 10th century stone inscription describing an elaborate panchayat system. That Mahasabha is still there in that village near Chennai. In that inscription there were even rules of disqualifying people from contesting for the Mahasabha, those who did not disclose their full income.”

The Prime Minister said “This history of democratic rule is there in many parts of our country. Centuries ago we had Shakta, Malla democracies and republics like Licchavi. In the Rig Veda too democracy was seen as “collective consciousness”.

“In other countries democratic systems are all about structures and institutions of polling, but in India it is part of our values and instruments of governance.

“It is ironic that we need to learn from western countries. The day is not far when it is said that India is the mother of democracy. In other countries voter turnouts are falling, in India however voter turn out is increasing with each poll especially with women and youth.

“There is a place for differences but never for disconnect. Guru Nanakji said : till the world exists conversations should continue and that is the soul of democracy.

“We may differ in ideas but we are all here to serve the public. That should be reflected in our work. As the construction of a new parliament begins we need to keep optimism around democracy alive, and that every MP is accountable to the people and Constitution.

“In our country whenever a temple is constructed it starts as a building of stone, it becomes a temple once prana pratishtha is done (setting the idol). Same with Parliament, the service of our MPs to the public good would be the prana pratishtha of this new building. Rajya Sabha gives strength to the federal structure of our constitution.

Mr. Puri also said “We hope this Winter session of Parliament in 2022, the 75th year of Independence be held in the new Parliament.”

Lok Sabha Speaker Om Birla said “It’s a day of pride for Indian democracy. Parliament House is a witness to our independence, framing of the Constitution et al. For the future it wasn’t possible to expand the scope of this building. Therefore both presiding officers thought a new Parliament House be built. 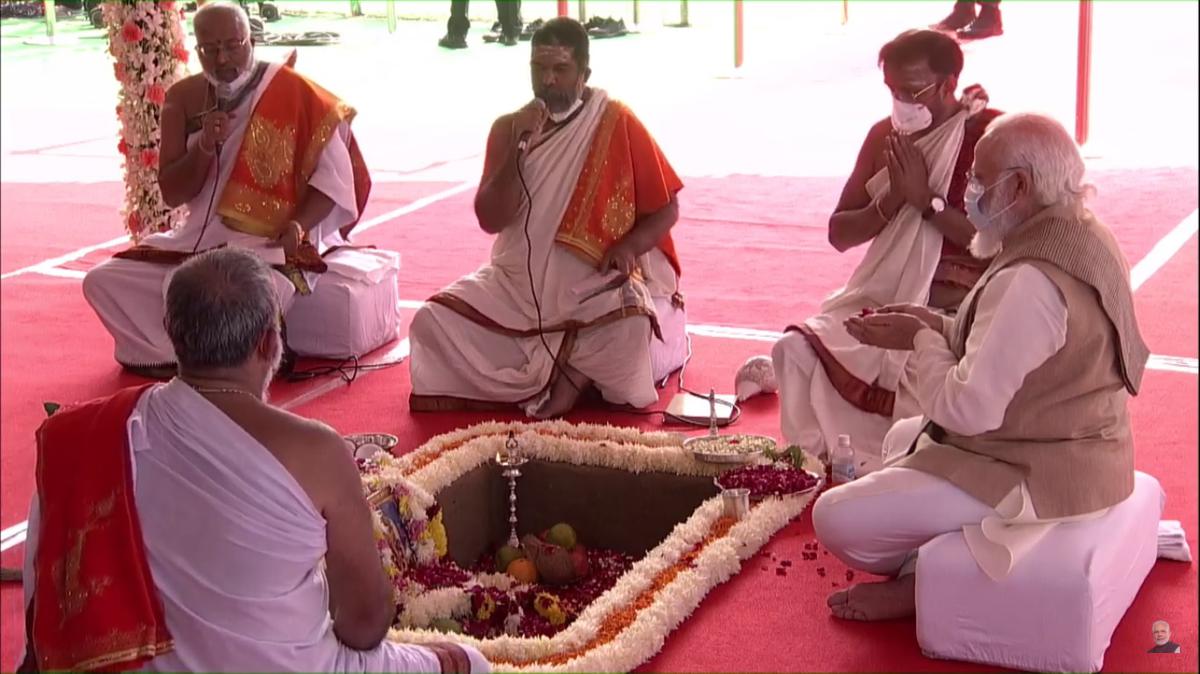 Prime Minister Narendra Modi participates in a ceremony related to the laying of foundation stone of new Parliament building. (Screengrab from the live feed via PMO India)

It will also have a grand Constitution Hall to showcase India’s democratic heritage, a lounge for members of Parliament, a library, multiple committee rooms, dining areas and ample parking space.

This has been done keeping in mind the future increase in the number of members for the two houses.

At present, Lok Sabha has a sanctioned strength of 543 members and Rajya Sabha 245.

In September this year, Tata Projects Limited won the bid to construct the new Parliament building. The new building will be constructed close to the existing one under the Central Vista redevelopment project.

The existing Parliament House building will be suitably retro-fitted to provide more functional spaces for parliamentary events, to ensure its usage along with the new building.

The existing building is a massive circular edifice of 560 feet in diameter. The Parliament House Estate is enclosed by an ornamental red sandstone wall or iron grills with iron gates that can be closed when occasions demand. The building has 12 gates.

Two Tests including D/N for Motera; Chennai to host 2 Tests, 3 ODIs for Pune