An opulent retreat at Noor Mahal in Karnal

With the pandemic and pollution in Delhi driving people to weekend destinations nearby, Noor Mahal in Karnal prepares to offer an opulent retreat

About 125 kilometres North of Delhi on the Chandigarh highway is the rustic town of Karnal where a luxury palace hotel, Noor Mahal competes with the famous heritage hotels of Rajasthan synonymous with big fat Indian weddings. After an eight-month hiatus, business is slowly returning to the place.

Compared to last year, weekend reservations between now and Lohri (the North Indian festival of harvest that falls in mid-January) have actually increased by 60% this year, says Roop Pratap Choudhary, managing director of the region’s largest property. Noor Mahal’s mention in the recent Hindi romcom Ginny Weds Sunny on Netflix has generated curiosity, he says.

“The pandemic may change attitudes but not aspirations,” he says. “International guests will take more time to resume travel plans but we are witnessing green shoots from domestic leisure travellers,” he says.

When you veer off the highway into a small inroad fringed with paddy fields, the kingly structure peeks out from the middle of lush green farms like a pop-up card! The architectural splendour on the outside and the feel of royalty inside, make Noor Mahal look every bit an ornamental heritage palace. 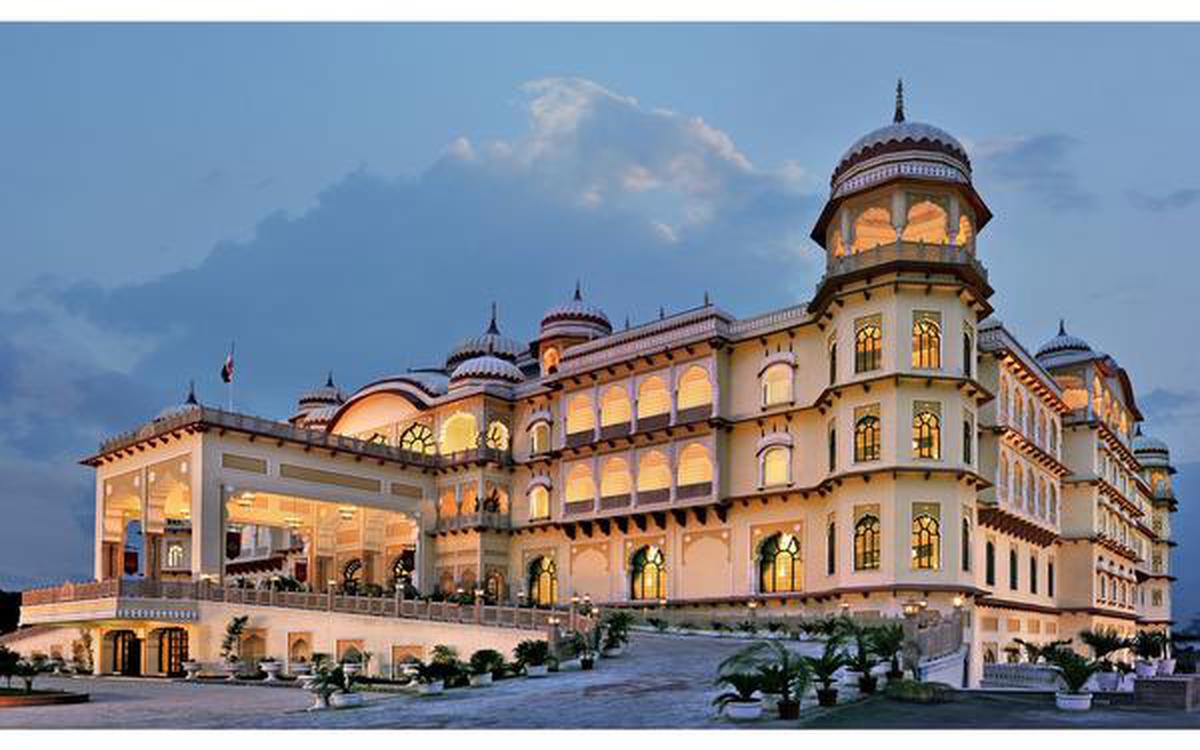 Defined by traditional Mughal and Rajputana architecture, the palace hotel is assembled to perfection as an artisanal heritage. Typically rich jaalis and jharokhas, scalloped arches and domes in Dholpur and red Agra stone, open sky and airy inner courtyards with wide corridors and pillars inlaid with gilt moulding have names like Deewan-e-Aam and Deewan-e-Khas, sculpted marble columns, picturesque terraces peeping out with turret like octagonal chhatris of the Rajputs, and ballrooms named Sheesh Mahal and Rang Mahal swathed in mirrors and frescoes studded with semi-precious stones complete the magnificent structure that straddles sprawling party lawns and stand out like a royal outpost in an agrarian landscape.

The man behind upgrading Karnal’s tourism profile is Roop’s father, a self-effacing retired Army Colonel, Manbeer Choudhary. It was his idea to fuse history, culture, aesthetics, heritage hospitality and modernity to an aristocratic fantasy. Architects Himmat Singh and the late Nimish Patel and interior designers Amey Kamat and Tushar Doshi of Ozone Designs, Mumbai, meticulously turned his dream into reality to build a grand landmark.

Noor Mahal was built just a decade ago, but it has been designed like a heritage structure over 12 acres and took eight years of thoughtful planning and execution. The hotel’s main attraction is the 1,800 sq.ft. Khwabgah, a royal sleeping chamber. Built by 600 workers in two years its main entrance is an ethnic five feet tall wooden door taken from a 230-year-old Bikaner haveli. It opens to an antique-laden, rust-ochre antechamber with a mini-bar and an aesthetically designed drawing room.

The bar’s facade is the chavara, (wooden balcony), salvaged from a heritage house in Amritsar. The glass door in the living room leads to a huge terrace with a panoramic view of the city.

The two bedrooms are like an art gallery showcasing handcrafted gold leaf frescos on the ceilings and displaying several artefacts including 19th-Century bejewelled wooden combs from a Mysore auction. The king-sized bed is accessorised by magnificently carved headboards and silk covers.The dining table is an intricately carved door from an old Rajasthani haveli that is glass topped. The chairs are made from window frames of forts. A personal chef panders to the guest’s requests and cutlery of course is all exquisite silver. A Museum in the lobby

If you are familiar with Shekhawati havelis or the heritage kothis like at the Amer Fort and Jaipur’s City Palace, many elements at Noor Mahal are easy identifiable like the 100-year-old door from a haveli in Bikaner fitted in a side wall of the lobby. An antique life-size portrait of Maharaja Duleep Singh, the last king to own the famed Kohinoor, adorns another wall.

From the high-domed ceiling hangs a handmade Swarovski chandelier, said to be one of the two pieces in India that came from Italy during the British regime. The other one is in the Durbar Hall of Rashtrapati Bhavan, Delhi. Sepia tonerare photographs of erstwhile maharajas at their polo games and hunting expeditions, their trophies and flags with insignia are strategically placed all over.

“The historical flourishes and minute detailing in every feature, fixture, design and craftsmanship stamps a royal connect at every step,” says Roop’s mother Binny Choudhary, an art and heritage conservationist

“Under the new-normal and safety guidelines, we are driven by motivation not to just innovate but redesign innovation and be future ready for the new world visitors,” says Roop Pratap, confident of bouncing back. He quotes last year’s Morgan Stanley report on India having 410 million millennials by 2022 (with an average age of 29 years) who will spend on short distance comfort travel and brief staycations with fine dining and unique culinary experiences.

Noor Mahal was declared the best destination wedding hotel in North India at the Indian Hospitality Awards-2018. The luxury palace hotel has 125 rooms and 18 banquet halls spread over 3,75,000 sq.ft and hosted 90 weddings in 2019 with 13 alone on a single day in December.

Neemrana Fort Palace, Neemrana (117 km)on Delhi-Jaipur highway. Climb many steps and roll down ramps to discover 553- year-old history in the nine palace wings built over 14-levels tiered into the Aravalli Hills. Attractions are the hanging gardens across six acres and the country’s first zip-line. (https://www.neemranahotels.com/fort-palace-neemrana)

Aloha on the Ganges, Rishikesh (225 km) located on the river banks close to the Lakshman Jhula and ensconced in serene forested hills, the exquisite resort is conducive for meditation and discovering your inner calm. (https://www.alohaontheganges.com)

Corbett Leela Vilas, Jim Corbett (250 km) Is a stress busting jungle resort where you can go on safaris or enjoy a walk around 2.5 acres of mango orchards. Or chill out in the elegant cottages with personalised services including fine dining. (https://www.corbettleelavilas.com)

Narendra Bhawan, Bikaner (456 km) Is a boutique hotel in the desert that narrates the life story of the last reigning Maharaja of Bikaner, Narendra Singh (1948-2003). Designed by Ayush Kasliwal in an urban landscape, the private palace residence is unconventionally curated to show and celebrate the snapshot of a life from royal birth to a global bon vivant to a socialist.

Notes from Lansdowne by Shikha Tripathi

Panel seeks cause of rise inmaternal mortality in E.G.

It took over 3 hours to control fire; cause remains a mystery