As many as 82 people in India have been found to be infected with the U.K. strain of COVID-19, the health ministry said on Friday.

The number of such people stood at 73 till January 6, it added.

All the people who have tested positive for the new variant of the virus were kept in single-room isolation at designated healthcare facilities by the respective State governments, the ministry had earlier said.

You can track coronavirus cases, deaths and testing rates at the national and State levels here. A list of State Helpline numbers is available as well. 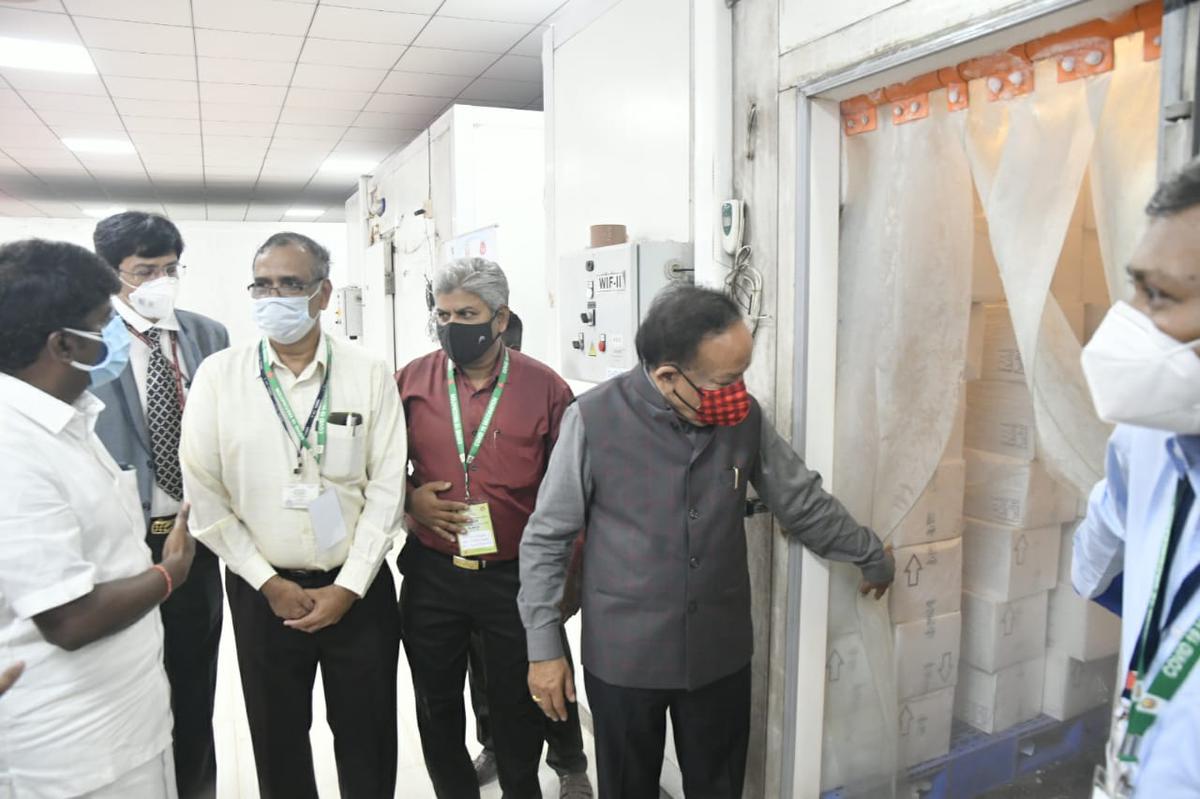 Union Health and Family Welfare Minister Dr Harsh Vardhan said soon it would be a reality to vaccinate the entire population in the country against COVID-19 after prioritising risk groups.

The Centre has started a new COVID platform to track particulars of potential vaccine beneficiaries and also issue electronic certificates to them, he told reporters after reviewing the dry run of administering COVID-19 vaccine at the Rajiv Gandhi Government General Hospital here as part of a state-wide programme.

India, he said, has done extremely well in developing vaccines in the shortest possible time, and presently two vaccines have been given emergency use authorisation.

“In the next few days, also in the near future, we should be able to give this vaccine to our countrymen prioritising those who are at risk in public and private sectors. The government has already made known the scheme of things,” he added. – PTI

82 people have tested positive for new mutant variant of SARS-CoV-2 in India: Govt

The number of people who have tested positive for the new UK variant of SARS-CoV-2 has climbed to 82 in India, the health ministry said on Friday.

The number of such people stood at 73 till January 6, it added.

“The total number of cases infected with the new strain of the novel coronavirus, first reported in the UK, now stands at 82,” the ministry said.

All the people who have tested positive for the new variant of the virus were kept in single-room isolation at designated healthcare facilities by the respective state governments, the ministry had earlier said.

Their close contacts have also been put under quarantine. A comprehensive contact-tracing exercise has been initiated for their co-travellers, family members and others and genome sequencing on other specimens is going on, the ministry said.

The situation is being closely monitored and regular advice is being provided to the states for enhanced surveillance, containment, testing and dispatch of samples to INSACOG laboratories.

The presence of the new United Kingdom variant of the virus has already been reported by several countries, including Denmark, the Netherlands, Australia, Italy, Sweden, France, Spain, Switzerland, Germany, Canada, Japan, Lebanon and Singapore.

Pfizer Inc. and BioNTech’s COVID-19 vaccine appeared to work against a key mutation in the highly transmissible new variants of the coronavirus discovered in the U.K. and South Africa, according to a laboratory study conducted by the U.S. drugmaker.

The not-yet peer reviewed study by Pfizer and scientists from the University of Texas Medical Branch indicated the vaccine was effective in neutralising virus with the so-called N501Y mutation of the spike protein.

The mutation could be responsible for greater transmissibility and there had been concern it could also make the virus escape antibody neutralisation elicited by the vaccine, said Phil Dormitzer, one of Pfizer’s top viral vaccine scientists.

A total of 18,139 new infections were reported in a day, while the death toll increased to 1,50,570 as 234 more people succumbed to the disease during the same period, the data updated at 8 a.m. showed.

The number of people who have recuperated from the disease surged to 1,00,37,398, pushing the national recovery rate to 96.39%, while the COVID-19 case fatality rate stood at 1.45%. The active COVID-19 caseload remained below three lakh for the 18th consecutive day.

There are 2,25,449 active coronavirus infections in the country, which account for 2.16% of the total caseload, the data stated. – PTI

Buoyed by the Emergency Use Authorisation approval from the Drug Controller General of India (DCGI)for its COVID-19 vaccine Covaxin, Bharat Biotech has said Phase-1 clinical trials of its new intranasal antidote for the killer virus will begin during February-March this year.

Krishna Ella, Chairman of Bharat Biotech had earlier said the company is focusing on the intranasal vaccine as the existing vaccines require two dose intramuscular injections and a country like India needs 2.6 billion syringes and needles which may add up to pollution.

An intranasal vaccine will not only be simple to administer but reduce the use of medical consumables such as needles, syringes, etc., significantly impacting the overall cost of a vaccination drive, he had said.

New research suggests that Pfizer’s COVID-19 vaccine can protect against a mutation found in two contagious variants of the coronavirus that erupted in Britain and South Africa.

Most of the vaccines being rolled out around the world train the body to recognize that spike protein and fight it. Pfizer teamed with researchers from the University of Texas Medical Branch in Galveston for laboratory tests to see if the mutation affected its vaccine’s ability to do so.

They used blood samples from 20 people who received the vaccine, made by Pfizer and its German partner BioNTech, during a large study of the shots. Antibodies from those vaccine recipients successfully fended off the virus in lab dishes, according to the study posted late Thursday on an online site for researchers.

The study is preliminary and has not yet been reviewed by experts, a key step for medical research.

Maharashtra public health minister Rajesh Tope said the Centre has agreed to bear the cost of coronavirus vaccination in the first phase where some eight lakh health workers in the State will get the jab.

“I had a video conference with union public health minister Dr. Harsh Vardhan where I demanded that the Centre bear the cost of vaccination including operational expenses,” Mr. Tope said in a video message.

Mr. Vardhan assured that the Centre will foot the bill for the vaccination in the first phase but did not say anthing specific about later phases, Mr. Tope said. – PTI

The U.S. registered its highest deaths yet from the coronavirus on the very day the mob attack on the Capitol laid bare some of the same, deep political divisions that have hampered the battle against the pandemic.

The virus is surging in virtually every State. California is particularly hard hit, with skyrocketing deaths and infections threatening to force hospitals to ration care. The same day that supporters of U.S. President Donald Trump stormed the Capitol, the nation recorded nearly 3,900 deaths. Mr. Trump and his followers have resisted efforts to social distance or wear masks to slow the spread.

According to data through January 6 from Johns Hopkins University, the seven-day rolling average for daily new deaths in the U.S. rose over the past two weeks from 2,668.7 on December 23 to 2,686.4 on January 6.

Catch Aadyam’s comic revival of ‘The Hound of the Baskervilles’ on January 9, 16, 17

Nokia AC: Nokia air conditioners launched at a starting price of Rs 30,999, to be available via Flipkart

Krejcikova becomes the first woman since Mary Pierce in 2000 to lift both trophies at Roland-Garros French...