The London-based artist Lubna Chowdhary’s new work explores the intersection between spiritual iconographies and the language of consumerism, with its symbols and logos

Code switch. The word doesn’t immediately call to mind a work of art; in fact, in linguistics, code-switching is when ‘a speaker alternates between two or more languages in the context of a single conversation’. But for Lubna Chowdhary, 57, it is vital to her artistic practice — to find common ground between “various binaries such as art and craft, East and West, industrial and handmade, ornamental excess and minimal restraint” — and her identity as a member of the Diaspora.

The London-based artist often explores hybridity. Her work, Metropolis, for which she made over 1,000 miniature clay sculptures (that travelled from the Victoria and Albert Museum all the way to the Kochi-Muziris Biennale in 2018), looked at the “hybrid languages of making”, while Tableaux (showcased at Jhaveri Contemporary’s booth at Art Basel Hong Kong in 2019) focussed on architectural juxtaposition — think steel-and-glass skyscrapers and bamboo scaffolding.

For her latest work, however, she has scrutinised the calibration between the spiritual and the commercial. As a Muslim who grew up in a country where Christianity is the official religion, she has absorbed diverse iconographies over the years. “I’m also interested in Hindu iconographies… particularity wayside shrines and how something as simple as a stone or a tree could become a spiritual object because someone decided to imbue it with a spiritual strength,” Chowdhary tells me over phone from her home in south-west London, recalling a temple trail in South India in the 90s, exploring the sculptures in Hampi and the gopurams in Madurai. She overlays the spiritual with the symbolic language of consumerism, with its symbols and logos, which has almost become a new religion. “I’m curious about the points at which these beliefs and processes intersect,” says the artist, who spent much of 2020 in her studio at the bottom of her garden, glazing and firing ceramic tiles, laser-cutting CAD drawings made on wooden boards, and painstakingly pasting industrial stickers on graph paper to explore these intersections.

Excerpts from an edited interview: Is the concept of code switching integral to who you are?

Yes. Though it is a term that I came across not so long ago, I realised that I’ve constantly been doing this: moving between cultures, between identities, adapting depending on the situation I’m in. There is this constant code switching between language, culture, aesthetics, identity, dress, lifestyle. The hybrid aesthetic of the work emerges from the contradictory state of being both inside and outside [cultures] as a result of my Diasporic experience.

My own transcultural condition — of having been born in Africa to parents from India/Pakistan [born in Punjab and who migrated during Partition], moving to the industrial north of England in the 70s at the age of five, then studying in London — has resulted in a complex narrative of origin. Even in the world of craft, where I began my artistic career, there were these extremes of aesthetic that I was caught between. All the way through my life as a person and an artist, I’ve been trying to resolve these and create some sort of resolution between polar opposites. 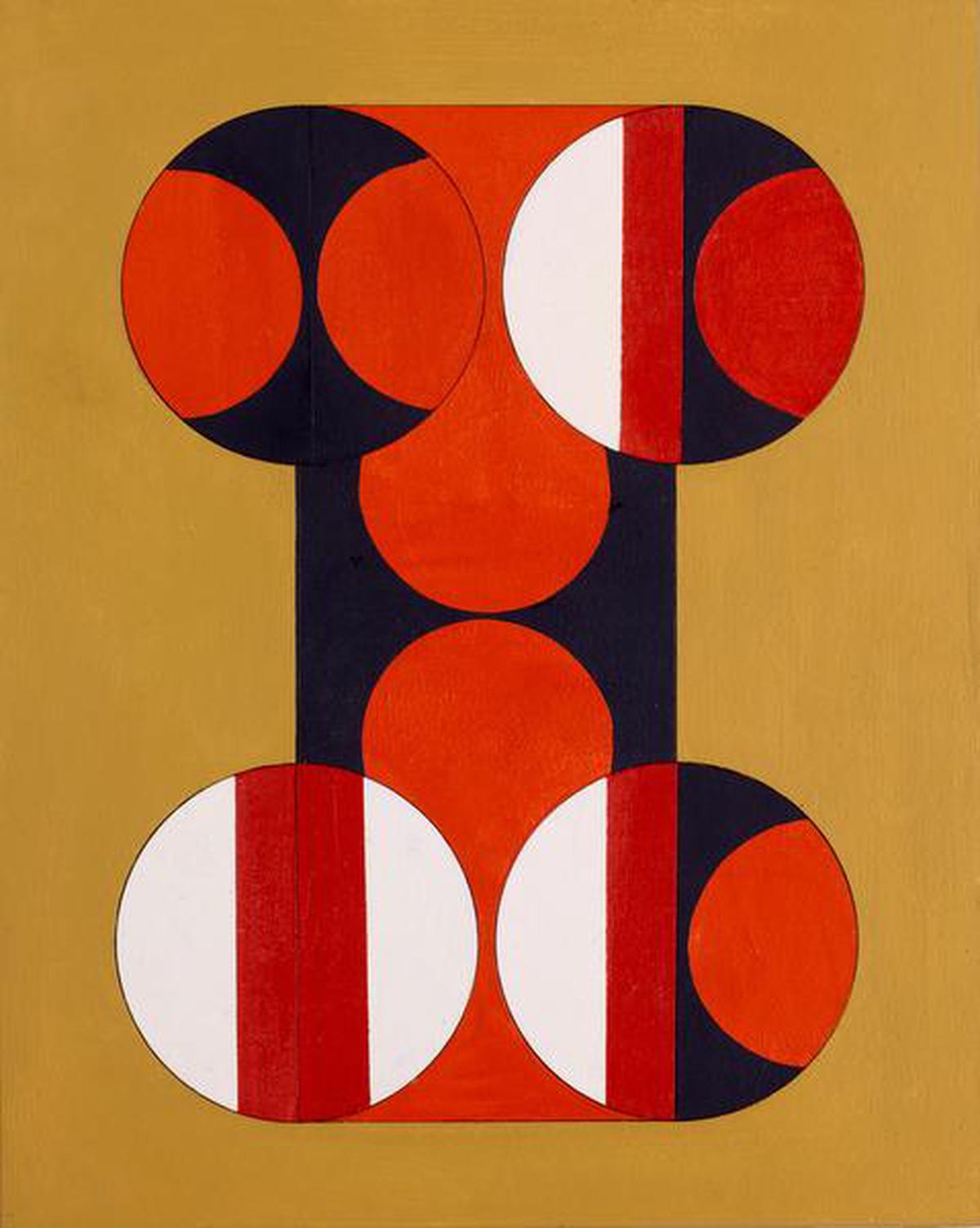 Code 1 – gouache and acrylic on gessoed board

What concepts did you build Code Switch around?

Code Switch probes ideas related to meaning-making through secular and spiritual objects of worship. Religion is now a meaningless preoccupation to many people. And with the position of spirituality on shaky foundations, it is rapidly becoming replaced by a more commercial iconography. This raised questions about values and rituals that shape people’s lives today. I’ve always enjoyed studying iconography associated with various religions. My own background is Islamic and its visual language of geometry, but I am equally interested in the symbolism of other religions and the way these images become tools for a spiritual life.

My 16-year-old son’s experience of life is very different to mine. He’s quite obsessed with logos and branding, as much as any other teenager. I got to thinking about how to find some sort of resolution between these. There are many curious instances where consumerism and religion overlap. For example, in India, gods are cheaply mass produced from plaster in vinyl moulds; Mecca’s religious tourism offers 7-star hotels for Hajj pilgrims; in China, zhizha or paper votives of consumerist items such as iPads, Gucci bags and Porsche cars are burnt as funeral offerings; and in Ghana, customised coffins come in the shapes of airplanes and Coca-Cola bottles! Did the pandemic impact how the work evolved?

I felt that the pandemic consolidated my thinking about ‘meaning’ in people’s lives. As a society, we began to question our norms. Issues of community, race, well-being, ecology and interconnectedness moved to the forefront of our consciousness. Last year, fast cars got dusty and expensive handbags lay symbolically powerless. Consumption now is increasingly about the non-material, such as culture, experiences. People have started to realise that they have to find something else in their lives. There is a sort of irony in it.

What was also nice about lockdown was that things slowed down; I could live at a normal, unfrenzied pace. The isolation and solitude were a creative and productive time of focus for me. I really don’t want to go back to that hectic pace I had earlier.

This show is a pivot away from ceramics, to paper and paintings.

I began the work at a residency in Stockholm last January. I was provided a beautiful empty space, tables and a chair, and the challenge of working without access to my usual studio set up — of clay, glaze, equipment, kiln. I had to work resourcefully and find new materials. I’ve always been interested in modularity and working with and adapting industrial materials and processes, so my first weeks were spent mostly in DIY stores searching for all sorts of readymades. Hence the production of new works on paper [the Code series] and the paintings [the Switch series], which are now exhibited alongside the ceramic works [the Sign series]. 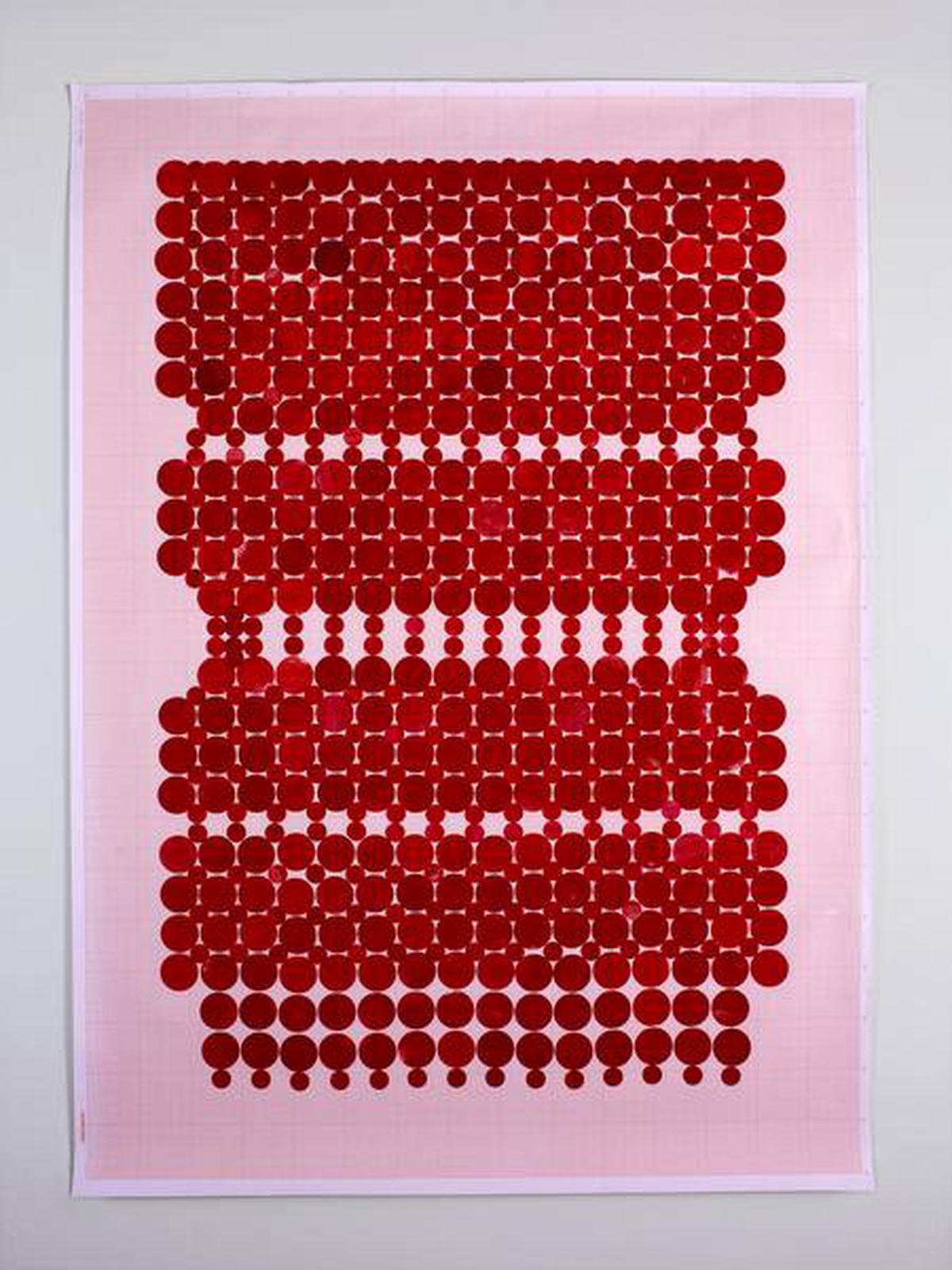 Could you describe the two series within Code Switch?

It is not difficult to switch between media; actually, it is a pleasure. The varied approach to materials makes room for a playfulness to come into action. The way I work is by using industrial processes [such as of precision waterjet cutting of ceramics], but overlaying and subverting it with manual processes, such as glazing. There are two series in this work. In Code, part of Series 1, I have used cheap industrial stickers and embellished them by hand-painting each and then carefully applying them on a pre-configured layout that has ornamentation at its core.

Series 2 — Switch and Sign — is more concerned with restraint and rationality. They both have the industrial precision of a flat material which has been technologically cut, then transformed through a manual application of colour that creates idiosyncrasies and irregularities. This interplay between oppositions of ornament and restraint has always created interesting parameters for me to work within. I enjoy the constant shift between the essential and the excessive.

What are you working on now?

I’ve got my first solo show in England coming up soon. I’m going to be making large three-dimensional work in wood [along with some ceramic work]. I wanted to explore a new material.

The wooden body of work has come out of a residency I did about three years ago at the V&A Museum, where I spent a lot of time researching hybrid furniture. These had been made in India for colonial subjects. But the two cultures were so different — with India being a floor-based culture, and England, where people didn’t sit on the ground. So there was a lack of understanding that resulted in objects that had Indian aesthetics but British functionality. There was an awkwardness to them. I was particularly drawn to these because there were lots of parallels to the work that I was making.

This new work is a sort of return to that thinking, about hybrid aesthetics within one object. I had wanted to come to India and work with a craftsman here — to study the translation that occurs between me, an already hybrid person with a hybrid aesthetics, and the artisan. But the pandemic changed my plans.

Code Switch will be exhibited at Jhaveri Contemporary, Mumbai, till February 27.

Supportive monetary and fiscal policies needed until pandemic is in check: IMF

India to give priority to Sri Lanka while supplying Covid-19 vaccine to other nations: Jaishankar | India News – Times of India

Officials of regional offices of Road Ministry, NHAI, NHIDCL to be responsible for non-compliance in quality measures

India’s engagement will be driven by its historical friendship with the Afghan people, says EAM Jaishankar