President Ram Nath Kovind is addressing the joint session of Parliament on Friday, which will mark the beginning of the Budget session.

As many as 16 Opposition parties, including the Congress and its allies, Left parties, and Trinamool Congress announced that they will boycott the address. Later in the day, AAP, SAD and BSP also said they are boycotting.

Here are the live updates:

In addition to facilitating faceless tax assessment and appeals, my Government has made many provisions of the Companies Act to be non-criminal to encourage entrepreneurship in the country.

For the first time, a production linked incentive scheme of about Rs 1.5 lakh crore has been implemented in the country for 10 sectors related to manufacturing. Its benefits have started showing in the manufacturing of many other goods including electronics.

The President  now speaks on digital initiatives of the government.

Digital payments of more than Rs 4 lakh crore have been made from UPI in December last year. Today more than 200 banks of the country are connected with the UPI system.

‘Trishakti’ of Jan Dhan accounts, Aadhaar and mobile (JAM) have ensured the people their rights. Because of this JAM Trishakti, 1,80,000 crores are being saved from falling into the wrong hands.

Our own navigation satellite system – NaVIC – is also increasing the pride of India today. Thousands of fishermen are getting the benefit of this.

More than 3 crore 20 lakh students are getting the benefit of various scholarship schemes of the government. These include students belonging to scheduled castes, backward classes, forest dwellers and tribal classes and minority communities.

The youth have benefited greatly by ending the interviews in Group C and Group D. The government has set up the National Recruitment Agency to relieve the youth from the hassle of taking several different exams for appointment.

Under the Pradhan Mantri Gram Sadak Yojana, construction of 6 lakh 42 thousand km of roads in rural areas of the country has been completed.

Internet connectivity along with roads in villages is equally important. After providing electricity to every village, my government is campaigning to connect more than 6 lakh villages of the country with optical fiber.

Efforts like the three lakh crore rupee emergency credit guarantee scheme, the 20 thousand crore special scheme for the hard-hit MSMEs and the Fund of Funds have benefitted millions of small entrepreneurs.

The MSMs from far-flung areas of the country are gaining transparency as well as greater participation in government procurement through the GeM portal.

Improvement in the standard of living of the people of the village is my government’s priority. The best example of this is 2 crore houses built for poor rural families since 2014. The pace of Pradhan Mantri Awas Yojana has also been accelerated to provide a solid roof to every poor by the year 2022.

He quotes B.R. Ambedkar on water policy. “Water is Wealth. Water being the wealth of the people and its distribution being uncertain, the correct approach is not to complain against nature but to conserve water.”

“Taking the inspiration of Baba Saheb, my government is working on an ambitious plan of ‘Jal Jeevan Mission’. Under this, along with delivering ‘every house water’, water conservation is also being done at a rapid pace. Under this campaign 3 crore families have been connected to the pipe water supply so far.”

In this campaign, water connections are being given to the siblings of scheduled castes and tribes and other people from the disadvantaged sections on a priority basis.

Kisan Rail introduced across the country is writing a new chapter in providing new markets to the farmers of India. So far, more than 100 farmer trains have been run through which more than 38 thousand tons of grains and fruits and vegetables have been sent by farmers from one region to another.

The government has also set up an animal husbandry infrastructure development fund of 15 thousand crores to encourage the setting up of infrastructure and investment in the dairy sector.

The biggest benefit of these agricultural reforms also started getting more than 10 crore small farmers immediately. Many political parties had given full support to these reforms from time to time only after realizing these benefits to small farmers.

At present, the implementation of these laws has been postponed by the country’s highest court. My government will respect and follow the Supreme Court’s decision in full respect.

The insult of the holy day like tricolor and Republic Day happened in the past is very unfortunate. The Constitution which gives us the right to freedom of expression, the same constitution teaches us that law and rule should be followed equally seriously.

My government wants to make it clear that before the three new agricultural laws were enacted, there was no reduction in the rights and facilities which were under the old system. Rather, through these agricultural reforms, the government has given new rights to farmers as well as new rights.

On small and marginal farmers

The need of the hour is that special attention should be paid to the small and marginal farmers who have only one or two hectares of land in the agricultural sector. More than 80 percent of all farmers in the country are small farmers and their number is more than 10 crore.

These are small and marginal farmers in my government’s priorities. In order to support the small expenditure of such farmers, more than Rs 1,13,000 crore has been directly transferred to their accounts through PM Kisan Samman Nidhi.

Vegetable and fruit production has also increased from 215 million tonnes to 320 million tonnes in the same period. I congratulate the farmers of the country for this.

The government has attempted a positive change in every system from seed to market in the last 6 years, so that Indian agriculture can become modern and agriculture can also expand.

In the last 6 years, there has been an increase of more than 50 thousand seats in undergraduate and post graduate medical education. The government has also approved 22 new ‘AIIMS’ under the Pradhan Mantri Swasthya Suraksha Yojana.

The self-reliant Bharat Abhiyan is not only limited to construction in India, but it is also a campaign to raise the standard of living of every citizen of India and increase the confidence of the country.

Under the Pradhan Mantri Jan Arogya Yojana, 1.5 crore poor in the country have received free treatment up to Rs 5 lakh. With this, more than 30 thousand crores rupees of these poor are saved from being spent.

Today, Ayushman scheme can be availed in any of the more than 24 thousand hospitals in the country. Under the Pradhan Mantri Bhartiya Jan Aushadhi Yojana, 7 thousand centers across the country are getting medicines at very cheap rates to the poor.

“We have seen huge benefits of the work done by my government in the last 6 years in the health sector during this corona crisis,” says the President.

It is a matter of pride for us that today India is running the world’s largest vaccination campaign. Both vaccines of this programme are manufactured in India. In this time of crisis, India has provided millions of doses of corona vaccine to many countries while discharging its obligation towards humanity, says the President.

We have seen huge benefits of the work done by my government in the last 6 years in the health sector during this corona crisis.

If we want to increase our importance, we have to become self-sufficient while reducing our dependence on others, says President Kovind echoing te Union Government’s Atma Nirbhar slogan.

The global circumstances created in the Corona period, when every country had its own needs as its priority, reminded us why building a self-sufficient India is so important, he says.

The President continues his speech

“Nearly 31 thousand crore rupees were also directly transferred to the Jan Dhan accounts of poor women. During this period, more than 14 crore free gas cylinders were also received by the poor women beneficiaries of Ujjwala scheme across the country.”

“In all its decisions, my government has also presented a unique example of the collective power of the federal structure. This coordination between the central and state governments has strengthened democracy and strengthened the prestige of the Constitution.”

The President pays tributes to former President Pranab Mukherjee and six MPs who lost their lives due to COVID-19.

“I am satisfied that due to the timely decisions of my Government, the lives of millions of countrymen have been saved,” Mr. Kovind says.

Lakhs of lives have been saved due to the timely decisions of my government, the President says. He lauds government’s initiatives such as One nation, one ration, Sharmik Special trains and Gareeb Kalyan Yojana for migrant workers.

“With the announcement of a record economic package to handle the economy, my government also took care that no poor have to starve.”

“Through the ‘Pradhan Mantri Garib Kalyan Yojana’, 80 crore people were ensured 5 kg extra grain free of cost for 8 months. The government also cared for migrant workers, workers and people living away from their homes.”

President begins his speech in Hindi.

This session shows no matter how big the challenge is, we will not stop and India will not stop, says the President. “Whenever India is united, it has achieved impossible goals.” 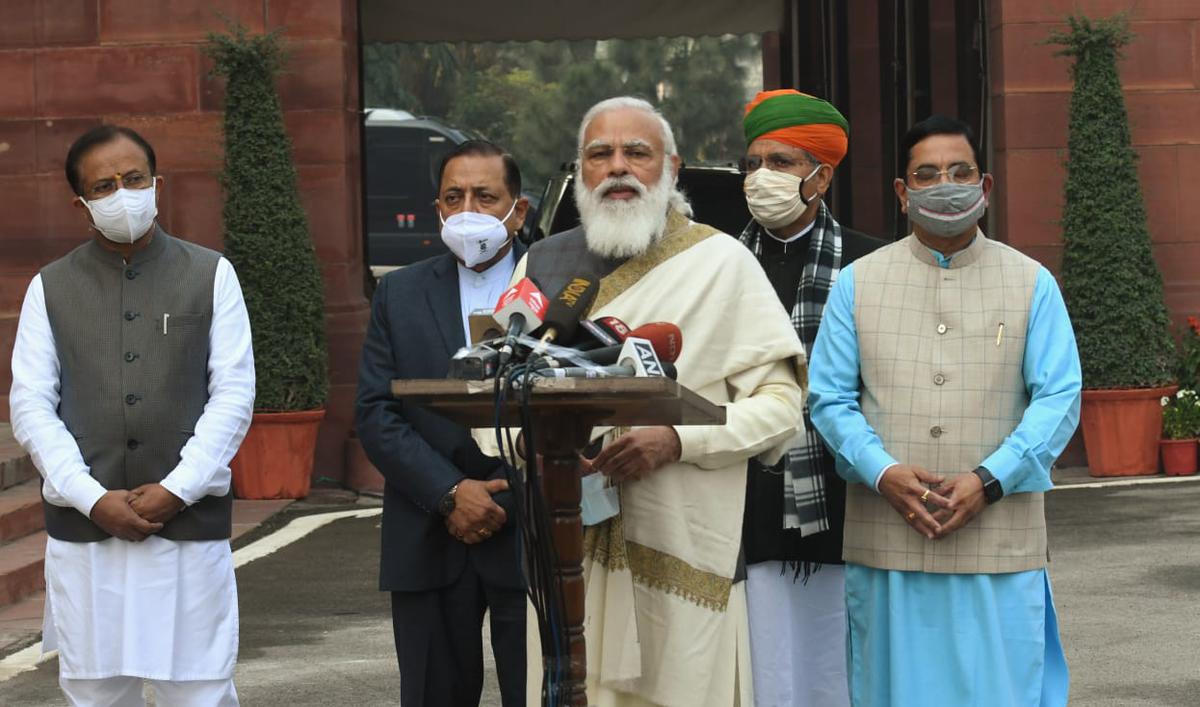 “Today commences the first Session of this decade. This decade is very important for the bright future of India. A golden opportunity has come before the nation to fulfill the dreams seen by the freedom fighters,” he says in Hindi.

This decade should be fully utilised. Keeping this in mind, there should be discussions in this session focussing on the decade – this is expected by the nation. I believe that we will not lag behind in making our contribution for the fulfilment of people’s aspiration, he says.

This is the Budget Session. For the first time in India’s history, in a way, the Finance Minister had to present 4-5 mini budgets in 2020 in the form of different packages. So this Budget will be seen as a part of those 4-5 mini budgets, he adds. Mr. Modi doesn’t take any questions.

Former Prime Minister H D Deve Gowda on Friday said he would not attend President Ram Nath Kovind’s joint address to Parliament in solidarity with the farmers agitating against the contentious farm laws.

“In solidarity with my farmer brothers fighting against the three #FarmLaws, I have decided, after consulting my party @JanataDal_S units, not to attend the President’s joint address of Parliament today,” the JD(S) supremo, a Rajya Sabha member, tweeted.

The Bahujan Samaj Party will boycott the president’s address to the joint sitting of both Houses over the Centre’s stand on the farmers’ demand to repeal the new agri laws and its “dilly-dallying” approach on matters of public interest, the party’s chief Mayawati said on Friday.

She made the announcement just hours before President Ram Nath Kovind’s address to the joint sitting of both Houses, making BSP the 19th party to announce boycott of the address.

UP D.El.Ed 2018 Result for all semesters available at btcexam.in, here's direct link

Budget to be seen as part of mini-budgets presented last year: Modi

No end to man-animal conflict in Wayanad

Corruption in FCI may slip out of control: Parl panel | India News – Times of India