Medium is the message

Reopening after a year, Shrishti Art Gallery puts the spotlight on emerging artists who experiment with three-dimensional artworks

After a year, Shrishti Art Gallery in Jubilee Hills, Hyderabad, is welcoming visitors into its premises with the exhibition ‘Maadhyam’ (medium). The pandemic had forced art galleries to go virtual. Now, to make the effort worthwhile for those who visit the gallery, proprietor Lakshmi Nambiar believes that it is important to emphasise the third dimension. Instead of two-dimensional paintings, Maadhyam has artworks by nine emerging artists who use a variety of materials to make wall hanging sculptures, tapestries with threadwork or combine a painting and a three-dimensional object for a unique narrative.

Ajaysingh Bhadoria’s wall hanging sculptures are like miniature replicas of archways and latticework that’s synonymous with Hyderabad’s architecture. During his post-graduation in Santiniketan, he visited France in an exchange programme and was fascinated by the architecture. Returning to India, he keenly observed Indian architecture: “The architecture in every Indian State is unique, representing the region’s history and culture. There’s so much variation in ancient architecture, unlike modern cities where everything appears the same,” he says. Ajay uses materials such as bone china, clay, terracotta and stoneware to create miniatures. He worked on the Hyderabad series after a residency programme in 2018, during which he explored the Old City. Art needn’t always be serious or brooding. There’s scope for satire — on people, urbanisation and changing lifestyles. Devesh Upadhyay’s sculptures explore the psychological and emotional state of an individual. What if we let our guard down and vent our emotions through expressions and not words? In his ‘silent conversations’ series, he presents human forms with amused and vivid expressions, at once making viewers chuckle while appreciating the dexterity of the work. “I learnt pottery making in art school and later began incorporating human expressions. Making clay models with the minutest of expressions is something I practised over time,” says the artist.

Elsewhere, Bibhu Nath invokes subtle humour when he juxtaposes the old and the new in quirky artworks made of paper pulp. He presents vignettes of rustic life, mythology, folklore and urban men and women, all at once.

Where are the farms? 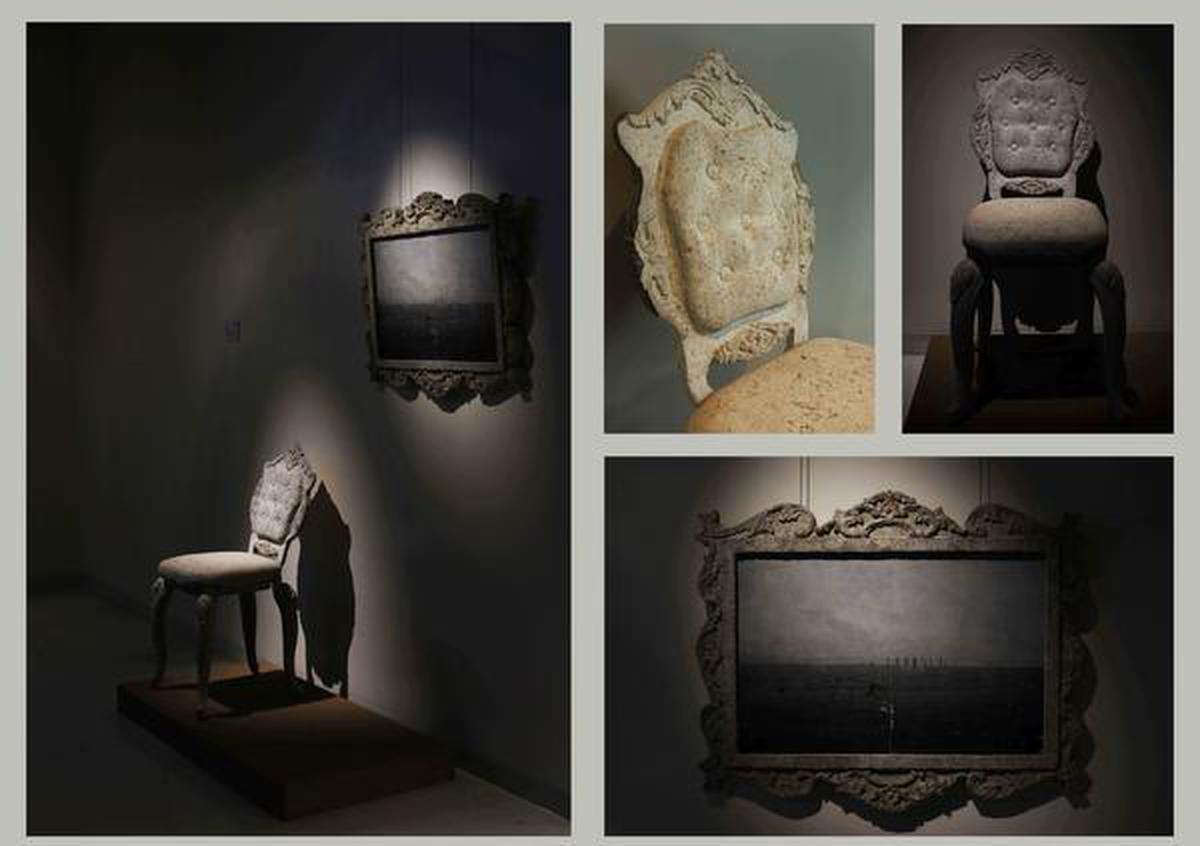 The plight of farmers becomes the theme for Sayantan Samantha’s work. Growing up in a Kolkata suburb, he witnessed agricultural lands being usurped for industrial use. An image of a factory is central to his artwork and is framed by a mixture of paper pulp, rice husk and concrete to hint at the transformation. An ornate chair placed near the photograph, he explains, is a metaphor that alludes to the shift of seat of power. Having worked on this theme for more than three years, the artist reflects, “My father was an irrigation officer and as I grew up, I saw how the region changed. With the decline of agricultural land, things of concrete gain importance.”

Chandrashekar Koteshwar’s small terracotta figures are a satire on museum exhibits that, if not visually displayed well, end up meaningless to the viewer despite detailed descriptions. Wrongly placed appendages, for instance, stress the need to step up display methods.

Hyderabad-based Gangadhar Mukinapallinga’s paintings hold a mirror to the importance the society gives to physical appearances, while we may be overlooking the need to slow down and stay in sync with nature.

One of Maadhyam’s focus is gender sensitivity, particularly identity and freedom. Insha Manzoor incorporates the Kashmiri practice of knotting threads when one makes a wish onto her cloth canvas on which a garment with Kashmiri embroidery and motifs take centrestage. What if one’s yearning for freedom remains an unfulfilled wish? 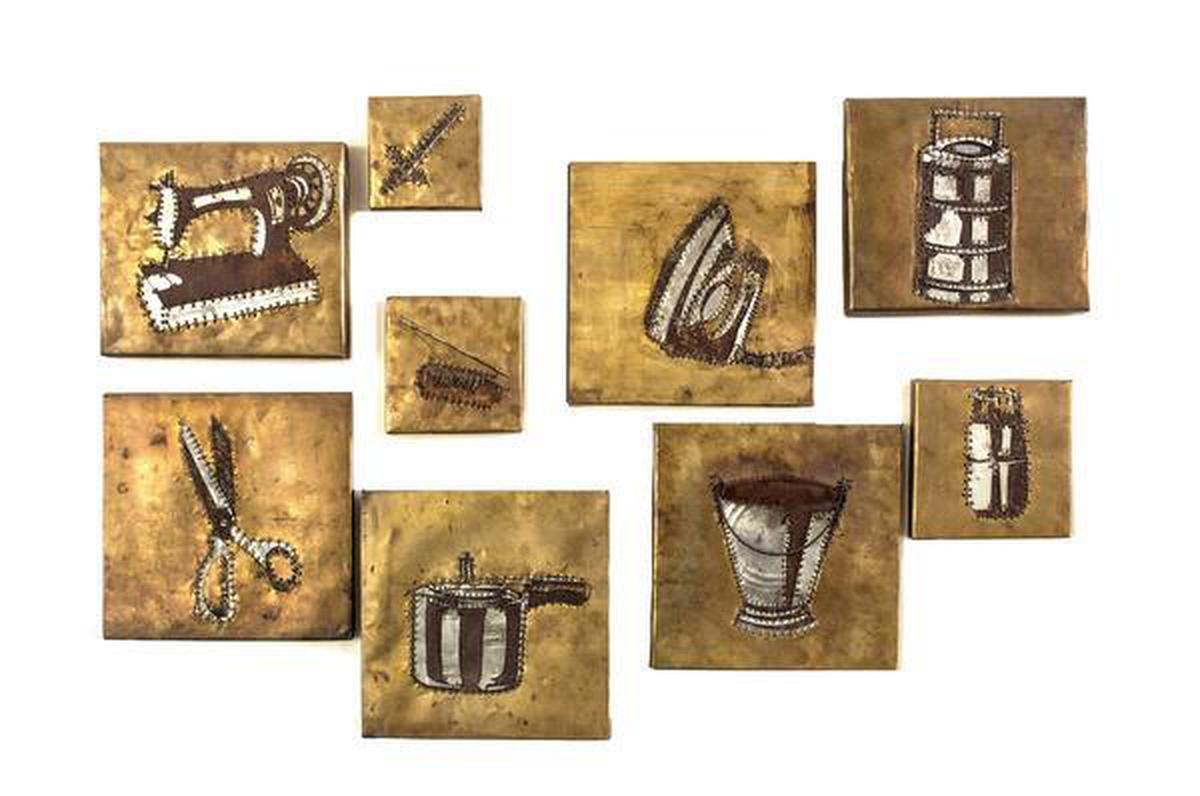 The most telling series on gender comes from Richa Arya who hails from Haryana and has witnessed how education is a formality for women to get ‘a good alliance’. “Most women in Haryana are still not encouraged to have a voice of their own or explore career options. I did my graduation in Haryana and post- graduation in Delhi and saw the difference in the scenario,” she says.

To depict the hardships faced by women as well as their tenacity, she uses heavy metals. “Iron is strong and pure but can get rusted without use, similar to what happens to women who aren’t allowed to put their education to use,” she says. Iron sheets are hammered and stitched onto steel, bronze and other surfaces to take on different forms. One series where she depicts everyday objects from the kitchen is her way of lamenting that these household utensils define the lives of women.

‘Maadhyam’ is on view at Shrishti art gallery, Hyderabad, till March 7

‘Raiders of the Lost Ark’ at 40: Movie magic of the best kind

I was called a ‘behenji’ and ‘shameless’ in the same breath: Neena Gupta

IPL 2021 | We are in safest bio-bubble but situation outside is grim: Ponting

Krejcikova becomes the first woman since Mary Pierce in 2000 to lift both trophies at Roland-Garros French...